The database on all things related to both the old and new series of Super Mario Bros. Z! We are currently editing 230 articles and have 1,552 images! You can help our wiki by contributing wherever you can.

Fierce Battle Between Fierce Rivals is the first episode in the remake of Super Mario Bros. Z, in addition to being the first episode of the Metallix Saga. Mark Haynes, the creator of the series, released the episode to Patreon donators on January 5, 2016, and to YouTube and Newgrounds on January 8. This episode features the Mario Bros. competing against the Wario Bros. in a headed tournament fight, which is interrupted by the nefarious Bowser. This episode also introduces Metallix, the main antagonist of the saga. (read more...)

Mario is a resident of the Mushroom Kingdom and one of the main protagonists in Super Mario Bros. Z. When enlisted by Sonic and Shadow, he begins his journey to stop Metallix from gaining all the Chaos Emeralds. (read more...) 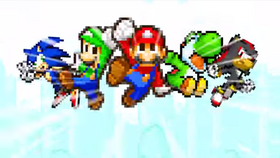 Join us on Discord!

Retrieved from "https://smbz.fandom.com/wiki/Super_Mario_Bros._Z_Wiki?oldid=27375"
Community content is available under CC-BY-SA unless otherwise noted.